SORA OCEAN
Piano&Vocal: James Wilson
Japanese flute Shinobue: Kazunari Abe
The two formed "Sora Ocean" at the end of 2009, and toured in Japan.
After half a year, they suspended their activity because James went back to his home country, USA.
Afterwards, Sora Ocean had gigs sporadically, in Ehime & Tokyo at the end of 2010, in New York at the end of 2011.
The album "88" is the result of a chance meeting between James and Kazunari in Shikoku Island surrounded by the beautiful sky (SORA) & OCEAN. 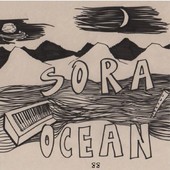